Ok, I know that my craft blog is getting awfully dry due to the lack of posts. Blame it on my busy schedules, which led to no spare time to craft, thus no posts to write. Then again maybe I wouldn't even have time to blog about one if I had a FO.

My crochet hobo bag (with Rastafarian inspired colours :D) is taking so damn looooong to finish. Oh and did I mention that I actually frogged it once? Because the base was just wayyyy bigger than what I had in mind. I wanted to bear with it, hoping that it will all turn out fine. But as I continued to crochet, it became more and more unbearable! 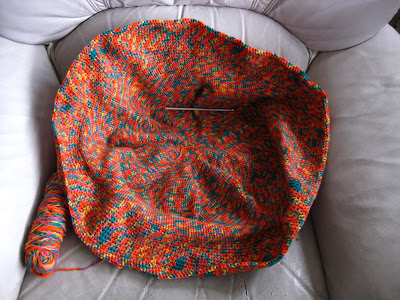 ok it looks damn big, but the base of the bag ends where I placed my crochet hook

So! New Crafting Resolutions for 2010:

As I have mentioned, I have enrolled myself in a dressmaking course (*shrieks with excitement) and have the priviledge to use a friend's sewing machine while I am still in Singapore!

Erm... anyone still remember this bag? My almost-finished-but-never-done Summer bag. Seems like there has been no conclusion for the bag???

I have had sooooo many ideas swimming around in my head (among all the other gunk like the plot of TVB dramas and administrative matters to settle for student visa etc). Then just when I was going to start a new project, the idea just seem to have sunk to the bottom of the sea, unretrieveable until several years later, just like the Titanic.

Due to my busy study schedule, I have not been getting into crafts at all for almost one whole year! Boo. But I shall try to be realistic and thus these are my 4 simple New Craft Resolutions for the year. I will end right here right now lest I keep yakking on and the list gets to number 20.
Crafted by gwenstella at 3:41 PM