Recently I've been into knitting ascot. They are mini projects that knit up quickly to give almost instant gratification and also, they can be knitted with one ball or less!

I've actually knitted Vickie Howell's Lana and Clark Ascot using Moda Vera Jelly yarn, the blue-white one that you can see from my previous post. It's meant to be a present to my friend, so I don't think I"m going to upload pictures of it so soon. What I can say is that I really felt like making another one for myself after that. (^_^)

But before I do that, I decided to make a black and white ruffled ascot look-alike. It's actually inspired by the Vickie Howell's The Formality Scarf and the ruffles seen in the knitted project "Pretty Pillows" that was featured in the Knitty Gritty Knits book that I got from the local library. 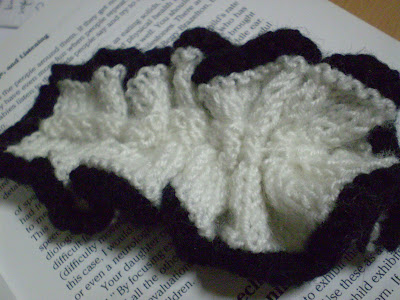 I really like the way it all turned out, although I didn't thought it'd actually look like this when I first started out. It's not really an ascot anymore. I think it looks more like a unique necklace. But one thing I have to admit is that the back doesn't look pretty with my haphazard sewing. 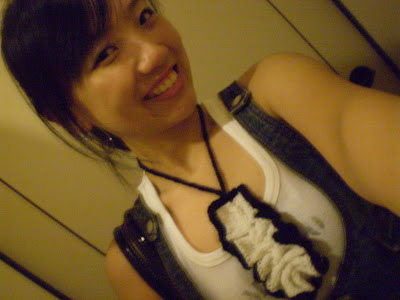 Crafted by gwenstella at 3:03 AM
Labels: I MADE THIS, KNITTED/CROCHET FINISHED OBJECTS, knitting, knitwear, novelty