I may not be blogging, but I've never stopped knitting

My fingers have never stopped working those needles and yarns despite my long absence here.


I made a right mitten to match with my Young hearts scarf using a pattern I found in the neighbourhood library. 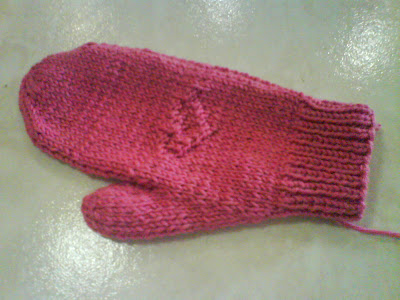 I started knitting the mitten with much hesitation as I wasn't very familiar of the terms like "shaping thumb gusset" and "turn your work around". I was doing well until I reached the part where I was shaping the top of the mitten when I realised that the mitten was too long; I started decreasing my stitches a little too late. So, out of frustration of how the whole mitten turned out (I also made a couple of other mistakes along the way), I took a deep breath, pull everything out and redid the mitten.


I have to say that I am still not entirely satisfied with the mitten, especially the part where I picked up one wrong stitch after finishing the thumb and continuing with the rest of the mitten. But overall, I still feel that it's a good attempt. :) However, I have to confess that the pattern that I used was supposed to be a glove, one with all 5 fingers. But knitting the thumb itself was already an uphill task, I didn't think I'll have the patience to do the other 4 fingers.


It was only after I was finished with the right mitten then did I found out about this great article to learn more about and to practise knitting mittens. Perhaps I wouldn't have had such a difficult time trying to figure out the pattern in my head and wondering if I should start knitting the mitten.


In addition, you may have noticed that the pictures and this entry have only been talking about the RIGHT mitten. What happened to the LEFT one? Well, the thing is, it's still not done... 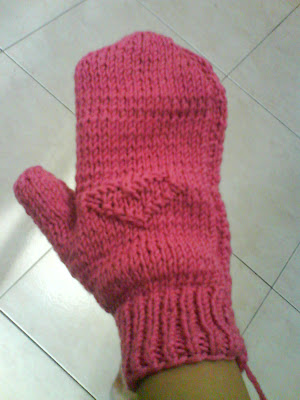 Crafted by gwenstella at 2:20 AM
Labels: knitting, knitting in progress, mittens