Stayover with Weiwen and Amanda

I finally got to bunk in with Weiwen and Amanda in their hall last Friday! I know it's been almost a week but I've been rather busy lately to put up the photos and to write about it. Anyway, here goes!

First of all, I finally got the chance to give them the presents that I have knitted and crochet for them. 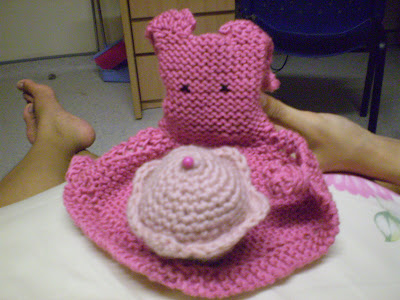 Please ignore the legs. Anyway it's not mine!
It's the Blanket Buddy as seen in 101 Designer One Skein Wonder and a Cupcake from BitterSweet. Actually I finished knitting the Blanket Buddy a long long time ago but never got around to fill up the head, embrioder the eyes and then give it to Amanda. The cupcake was an easier project that I finished in a single day. 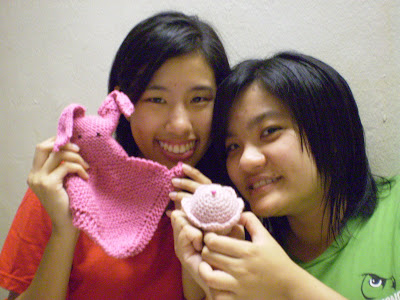 Hopefully Amanda will feel more comforted during her lonely nights in hall with the Blanket Buddy with her! And I certainly do not wish that Weiwen will get too tempted to eat the strawberry cupcake. She'll be choking on the whole furball!
Then we baked the whole night away in the hall's kitchen. Well, almost. It's supposed to be Weiwen's Double Chocolate Chip Cookie, but really it's simply a recipe she got somewhere and she added double the amount of chocolate chip required. There was so much cookie dough that we couldn't finish the entire batch that we baked that night! I'll try to post the recipe up soon. (^_^) 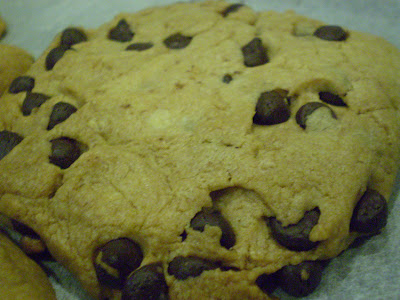 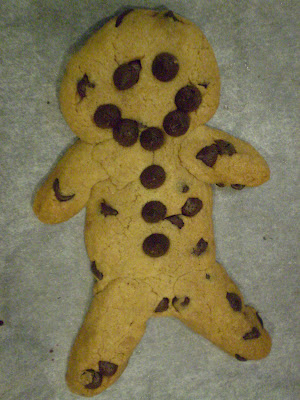 Last but not least, I tried baking my cupcakes (yet again!) using the REAL oven in the hall kitchen. I thought it's gonna come out great. But it turned out HORRENDOUS, and this is not an exaggeration. The cupcakes was dark, flat, dense and tasted rubbery.
I wonder if it's the problem with the mixture or the heat. The mixture had turned all watery by the time we started pouring it into the paper cups. But it also could have been the heat settings of the oven. Don't tell me how high I set the oven, I really don't remember.
One thing that I have to say is that this is the WORST baking attempt ever for the cupcakes. I kept trying to explain to both Weiwen and Amanda that it really isn't supposed to turn out this way and I've made it 100 times better in my previous attempts using my toaster oven. 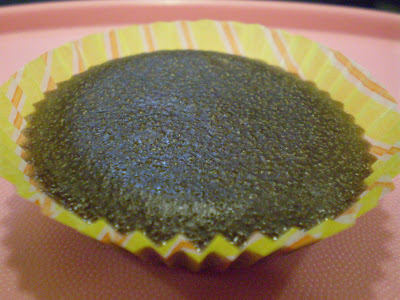 Crafted by gwenstella at 12:26 AM
Labels: bake, cake, cookie, I MADE THIS, novelty, others